Resources » Blog » A phone call from the Arctic!

A phone call from the Arctic! 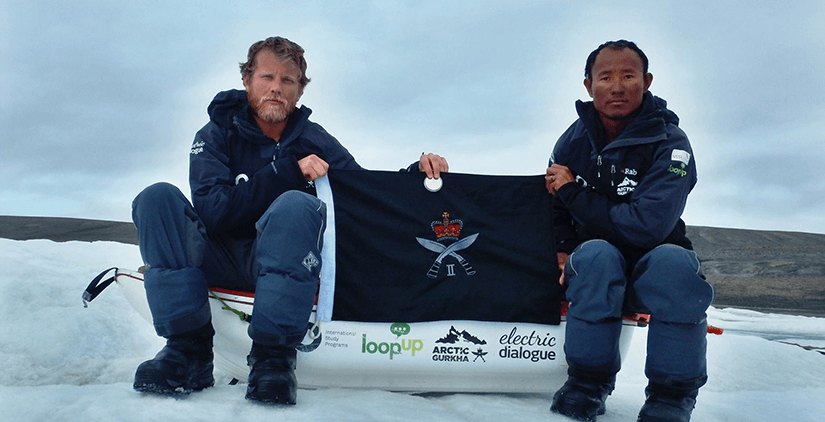 As we mentioned on our blog a couple of months ago, we’re extremely proud to sponsor Expedition Arctic Gurkha, an attempt to circumnavigate Ellesmere Island in record time while raising money for the Gurkha Welfare Trust.

Captain Jon Armstrong and Corporal Arjun Limbu are now well into the challenge, having completed phases 1 and 2, which have consisted of cross-country skiing and walking across ice for the past two months(!). They are now at Alert, the northernmost inhabited place on earth, enjoying some rest and recuperation before the final phase of the expedition, which involves kayaking down the Nares Strait to the end point of Grise Fiord.

We had the chance to catch up with their progress on a quick call earlier today. While we’ve been enjoying a heatwave in the UK, Jon and Arjun have been on their feet (or skis!) for 10 hours a day in punishing Arctic conditions, including snow blindness, perilous melting ice and spotting no fewer than 11 polar bears. In perhaps the understatement of the century, Jon stated, “It’s quite draining, really.”

Despite the dangerous conditions and the emotional, mental and physical challenge, Jon said that they are enjoying the breathtaking beauty of the Arctic, especially when that beauty is punctuated by ham and cheese sandwiches being delivered from on high by a Canadian helicopter!

We wish Jon and Arjun the best of luck for the remainder of this incredible expedition, and look forward to hearing their updates soon – via a LoopUp arctic conference call, of course!

We are delighted to announce the opening of four new LoopUp offices in Madrid, Chicago, Dallas…